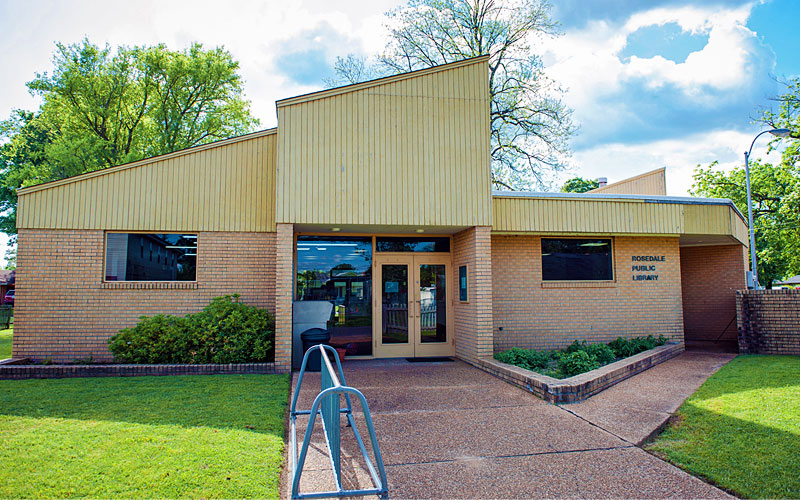 The Rosedale Public Library started out in the home of Alma Morris until 1935, when it moved into a newly renovated room in the Court House under the guidance of West Bolivar County Library Director Lorene Rush Goza. During the renovation, the library was operated out of a borrowed bookmobile at the Court House. Ms. Goza was succeeded by Rosa Belle Shelby in December 1940.

Newly decorated, the library had an Open House on June 7, 1959, that feature Benoit author George Patterson, who autographed his book Out on Egypt Ridge. Bobbette Farrar was the librarian at this time and was succeeded upon her retirement in 1973 by Vivia Lorance Michael, who served until 1979.

The library moved from the Court House in 1979 to its present building on Front Street. The building was designed by Kaplan & Oakland, who won awards for their innovative design, and built by Roy Collins Construction. The librarian in 1979 was Elizabet McCreary Myrick, who was succeeded by Joyce Applegate in 1986.

The library received a thorough renovation in the fall of 2017 through the determined efforts of the Friends of Rosedale. The renovation was spearheaded by Board member Becky Lewis, who was awarded a 2017 Mississippi Library Association Champion Award in recognition for her dedication. An Open House was held on January 26, 2018, to celebrate the renovation. At the Open House, the Friends of Rosedale recognized former librarian Joyce Applegate with a plaque for her 20 years (1986-2006) of dedicated service and named the meeting room “The Joyce Applegate Room.”

Martha Lawson has been the librarian since 2007. Martha received the Mississippi Library Association’s Mary Julia Anderson Award in 2015 for her tireless dedication to the library field and her patrons.

A meeting room is available to the public; please contact the librarian for more information.